Nari Shakti Puraskar 2019: President Ram Nath Kovind conferred Nari Shakti Puraskar 2019 to 15 eminent women on the occasion of International Women’s Day at a function held at Rashtrapati Bhavan on March 8, 2020. The award aims to recognize their outstanding contribution towards the emancipation of women, especially marginalized women.

The winners of the Nari Shakti Puraskar 2019 belong to diverse fields including sports, education, agriculture, handicrafts, armed forces, wildlife conservation and afforestation. They have been recognized for showing exemplary courage and safeguarding women’s rights, especially the rights of most vulnerable and marginalized women.

• The oldest recipient of the prestigious honour was 105-year-old Bhageerathi Amma from Kerala. She was jointly awarded the honour along with Karthyayini Amma, who is also from Kerala.  They both passed the Class IV literacy equivalent examinations. Bhageerathi Amma is the oldest literacy equivalent leaner under Kerala State Literacy Mission, while Karthyayini Amma scored 98 percent marks and won the first rank. 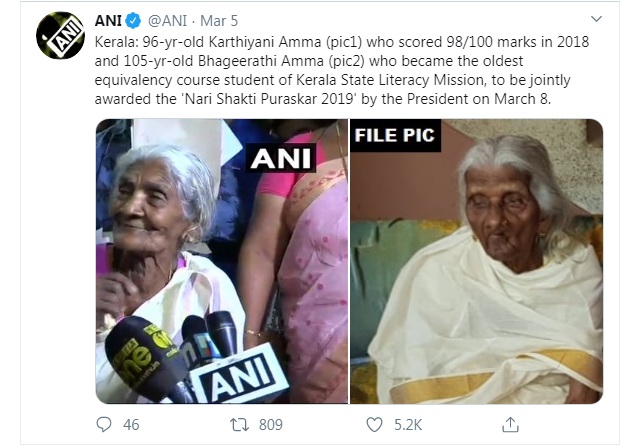 • The 104-year-old Mann Kaur, known as ‘Miracle of Chandigarh’, was also honoured with the Nari Shakti Puraskar 2019 for her achievements in athletics and track and field events. She had set a new record by becoming the world’s fastest centenarian at the American Masters Game, 2016. She has won over 30 medals in track and field events across the world.

• Jammu and Kashmir’s Arifa Jan, founder of Numdha Handicrafts, who helped in the revival of the lost art by training over 100 women in Kashmir, also received the honour for her exemplary effort.

• Mountaineer twins, Tashi and Nungshi, who had become the first female twins to scale Mt Everest in 2013, were also honoured with the Nari Shakti Puraskar 2019. Besides the world’s tallest peak, they had also scaled Mt. Elbrus in Europe in 2013, Mt. Vinson in Antarctica and Puncak Jaya in Australia in 2014 and Mt. Kilimanjari in Africa in 2015. 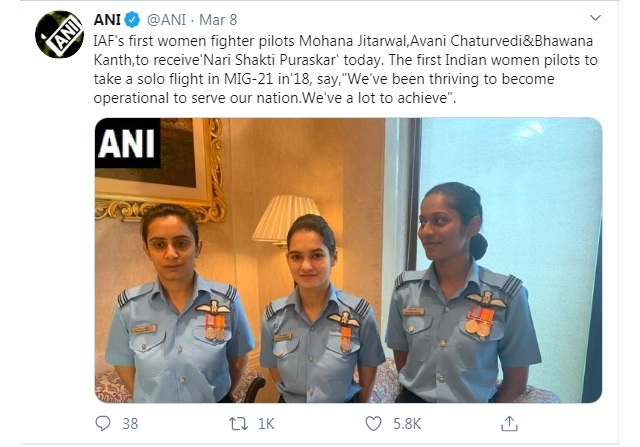 • Nilza Wangmo from Ladakh was also recognized with the Nari Shakti Puraskar 2019 for representing the traditional Ladakhi cuisines and exquisite recipes across India.

• The 58-year-old Kalavati Devi, who became a driving force in reducing open defecation in Kanpur by building over 4000 toilets in the villages in and around the city, was also honoured for her efforts.

Before the Nari Shakti Puraskar 2019 presentation ceremony, there was a special screening of ‘Swachh Bharat – India’s Sanitation Story’ at the venue for the audience. The film showed the massive change that has come in rural India, especially when it comes to behavior under the Swachh Bharat Mission. It also highlighted the key role played by women in pushing over 55 crore people to drop the practice of open defecation.

The Nari Shakti Puraskar was established by the Ministry of Women and Child Development to recognize the exceptional work done by individuals and institutions for women empowerment. The national awards are conferred annually on March 8.