Perseverance in News: National Aeronautics and Space Administration (NASA) has named its Mars rover Perseverance. NASA has scheduled its Mars mission in July 2020. NASA has renamed its rover after a nationwide competition. Earlier, NASA has given it an unofficial title.

According to the information released by NASA, a seventh-grade student was declared the winner for naming the rover. Alexander Mather recommended that Rover should be named ‘Perseverance’ that voted more than any other entry.

NASA’s Mars Rover ‘Perseverance’ would work as a robotic scientist. It weighs about 2300 pounds (approx 1043 kg). The rover Perseverance will research for signs of past microbial life on Mars. The Perseverance will also collect samples of Martian Rocks from the Red Planet. It will collect dust samples for next Mars missions that can help human exploration of the Mars Planet.

According to the official website of NASA’s Mars mission Perseverance is a car-sized rover which is about 10 feet long, 7 feet tall and 9 feet wide. NASA claimed that various parts of Rover are similar to what a living object would require to keep it ‘alive’ and able to explore. 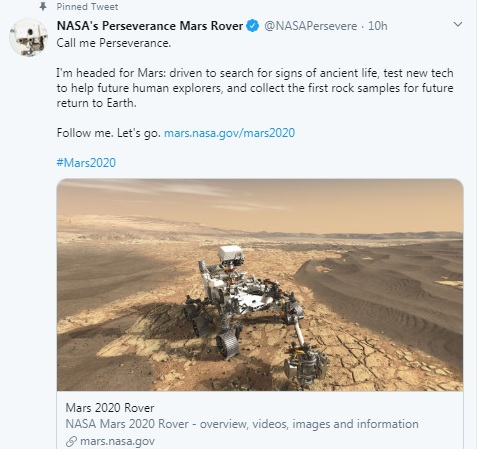 NASA’s Mars 2020 mission includes a rover going on a trip to Mars this year. It will not only discover the possibility of life on the red planet but will also pave the way for future manned missions. The rover is built in the chamber of the Jet Propulsion Laboratory in Pasadena, near Los Angeles, where its driving equipment was successfully tested last week. The rover will depart Cape Canaveral, Florida in July 2020, and will land on Mars seven months later in February 2021. It will become the fifth American rover to land on the Red Planet. The equipment installed in the rover includes 23 cameras, two hearing aids to hear the winds of Mars, and a laser for chemical analysis.

NASA has decided to launch its mission in July 2020 because Earth and Mars will be in a good position for landing on the Red Planet. According to NASA, it will require less power for traveling and landing on Mars. It is a good time to launch this mission compared to the other times when Earth and Mars will be in a different position in their orbits. NASA’s Mars 2020 mission is based on its Mars Science Laboratory to keep the mission’s cost and risk as low as possible.